Eclipse is the third novel in the Twilight Saga by Stephenie Meyer. It continues the story of Bella Swan and her vampire love, Edward Cullen. The novel explores Bella’s compromise between her love for Edward and her friendship with shape-shifter Jacob Black, along with her dilemma of leaving her mortality behind in a terrorized atmosphere, a result of mysterious vampire attacks in Seattle.

Eclipse is preceded by New Moon and followed by Breaking Dawn. The book was released on August 7, 2007, with an initial print run of one million copies, and sold more than 150,000 copies in the first 24 hours alone. Eclipse was the fourth bestselling book of 2008, only behind Twilight, New Moon, and Breaking Dawn. A film adaptation of the novel was released on June 30, 2010.

Eclipse received generally positive reviews. Critics noted its exploration of more mature themes than those of its predecessors, while praising the novel’s love triangle and plotting. 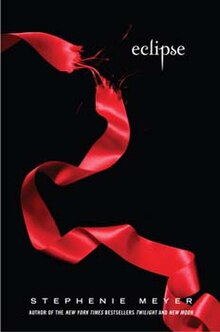